Looking for things to do in Peru? Embark on an unforgettable adventure now! Begin in Ollantaytambo, where you’ll meet your transportation in the Plaza de Armas in front of La Esquina café. Enjoy a beautiful drive as we ascend nearly 1,000 m from Ollanta to the upper Andean community of Patacancha or Huilloc (depending on the size of the group). The gravel road is bordered by Inca terracing, waterfalls, and traditional farm plots that are still used today. The communities that you’ll pass on your journey up the mountain are known for their traditional lifestyle, dress, and weaving.

Following a warm welcome at the local weaving center, learn from the women of the cooperative about their daily lives and the ancient art of weaving. Gain insight into Andean backstrap weaving as it relates to Andean culture and history. Then, test your own weaving skills and give spinning on an Andean drop spindle a try! Discover the potential of native dye plants that have been used for centuries. A woman from the cooperative will work with you one on one to teach the basic techniques of weaving. You’ll create your own “pulsera” (bracelet) to take home and showcase your new skills.

After the workshop, visit a traditional Quechua home and enjoy a lovingly prepared home-cooked meal. Your delicious lunch includes a soup and main course and will be hosted by a weaver in her own home (always close-by). If you want to expand your global culinary skills, you can select the earth-oven lunch option and work alongside women from the community to prepare a traditional Andean “Pachamanca” lunch. Cooked in an underground earth oven, this festive feast is a highlight of the tour and will provide plenty of food for you and your Quechua hosts to enjoy.

“Before returning to Ollantaytambo, you’ll have the opportunity to purchase high quality, handmade textiles directly from the artisans”.

The whole complex is another National Archaeological Park. It is located in the Ollantaytambo district, province of Urubamba. The town is about 76 Kms. (47.2 miles) away from Qosqo by the road Chinchero – Urubamba and about 68 Kms. (42.2 miles) by railway; at an altitude of 2700 mts. (8856 ft.). It is a very vast complex which central part is in the town and its surroundings; traveling from Qosqo, from Pachar there is a large amount of farming terraces that are already part of the complex. Those terraces are deteriorated and most of them abandoned; it is sad to observe that the enormous work for constructing them, today is not appraised with some minimum conservation policies. The water that irrigated them does not flow any more. Their stone aqueducts that were a master work of engineering were extended by many kilometers; but, today they do not exist any more in most of the cases. The reason for that, is simply that today no one is preoccupied with keeping them and because we had three centuries in which conquerors were not interested in agriculture but only in mining gold and silver.

Farther down are the strongholds of Choqana on the left bank of the Urubamba River, and Inkapintayon the right bank; they were part of the complex protective system for the Inkan urban core. Advancing downstream are the foundations of an Inkan Bridge, its central base is impressive and was made with huge stone blocks. Before that central base there are two enormous boulders placed for protecting it efficaciously as a mole breaking waters of the river into two. Likewise, on both river banks are the two solid lateral bases of that bridge. Originally, that was a suspension bridge made with braided fibers of “ichu” the local wild bunch grass, or maguey (Agave americana). Because those materials do not last forever the bridge must have been renewed annually. Going on by road, about ½ Km. away from the bridge is the great ancient main gate of the Ollantaytambo Inkan City; it was part of a surrounding wall and is named today as ” Llaqta-Punku” (Town Gate).

Ollantaytambo is a compound Quechua word that is derived from ” Ollanta” that is a personal name, and ” Tambo” that is a Spanish form of ” Tanpu” that refers about a city that offered lodgings, food and comfort for travelers. “Ollanta” is the name of an Inka Captain whose history was kept as an oral tradition and written as drama by Antonio Valdez, a priest from Urubamba, by the middle of the XVIII century; it was adapted for a theatrical play and opened in 1780. It is apparently since then when “Ollantaytambo” (Ollanta’s tambo) began being used to name the town where events of the drama were carried out. The Ollantay Drama is considered as a classical work of Quechua literature and tells the story of a captain named Ollanta, extraneous to the Cusquenian nobility and who formed part of Inka Pachakuteq’s army. He was distinguished among the others because of his bravery and great skill, but had a secret love affair with the monarch’s daughter named Kusi Qoyllur. When trying to marry her officially his request was considered illegal because the rules in force forbade marriage between persons of different social status. Disappointed the young captain went deeply into Ollantaytambo and incited its population to rebellion against the imperial army, causing a war for a whole decade. He was finally captured thanks to a trick of captain Rumiñawi who appeared as having been vexed and thrown out from Qosqo and succeeded convincing Ollanta in order to get asylum; but, during the night when everyone slept he opened the city gates allowing the Qosqo army’s entrance and the capture of Ollanta who was taken to the capital. Fortunately for him, when he arrived in Qosqo the Inka Pachakuteq was already dead, his son being the new sovereign who was told about the true story, and with wise clemency allowed the marriage of the two lovers from whose old relationship a girl had been born and whose name was Ima Sumaq. It is a story with a happy ending that nowadays is very popular in Peruvian schools that in many cases stimulate its performance.

Ollantaytambo was a very important fortified city, built as a “tanpu” and also in order to enable control of the roads toward the “Antisuyo” (jungle). According to many historians also in order to allow protection of the great Inkan Capital from attacks of the “Antis”, their worst enemies. Today, its name as “fortress” is common, which in practice is improper because it did not have just a warlike or protective duty; but, that of a complex city with an ample urban sector and religious temples. As a fortified city, it had some protective elements, among them a protective wall with few entrances surrounding the town, many “pukaras” or strongholds and watch towers strategically located. Besides, for the noble population dwelling in this city there was a very ample and well planned urban sector, a plaza surrounded by important buildings and toward the town’s south an impressive “Kallanka“; that is, a building which dimensions are colossal and completely roofed. It served as a lodge and perhaps also as barracks for the numerous army of the region.

The present-day town is located in the same site where the urban sector was in Inkan times. It is really interesting because it is the only spot in Peru where it is possible to find people living in the same buildings that served as homes for the nobility of the Inkan Society. Some of its narrow streets still keep their water channels where very clean water flowed for the population use; they are by the middle or at one side. The streets still maintain their Inkan names. The town was divided in rectangular blocks with a very well planned geometrical layout giving the impression of being a town designed by modern architects. Every block was compound of two “kanchas” (apartments); the street gates had double jamb doorways which indicate that those were real palaces with rooms around a central patio. At least the lower part of the buildings is original and made with “pirka” type walls that were covered with a clay coat and possibly also had mural paintings. Today, their thatched roofs were replaced by red tiles and it is possible to breath a certain air of modernity as the town has electricity and tap water; but in short, the town has still an Inkan taste. Some decades ago in Ollantaytambo, a worldwide meeting of the “Indian” representatives was carried out and they declared this town as the ” World Capital of Indianity”. By that time there were some efforts willing to help for an effective conservation of original structures; in practice, it is so little what was and is done for that purpose, and it is so sad to prove that many of its innate elements are being lost slowly.

Towards the town’s east is the Pinkuylluna hill (pinkuyllo = wind musical instrument similar to the “quena” or Andean flute) where an imposing huge building stands out and about which there is a lot of myth. Some very imaginative “scholars” argue that it’s been a school, a hospital some others, jail others, and even a hurling precipice!; according to archaeology and the Inkan architectonic characterization it was a “Qollqa” or “Pirwa“; that is, a granary or storehouse for food, clothing and weapons for local army. It has many doorways and openings that allowed ventilation, and surely they were built up there to enable protection of the stored goods. Likewise, some other smaller buildings are located in outstanding spots or angles of the mountain that served as watchtowers for controlling movement of persons in the valley. 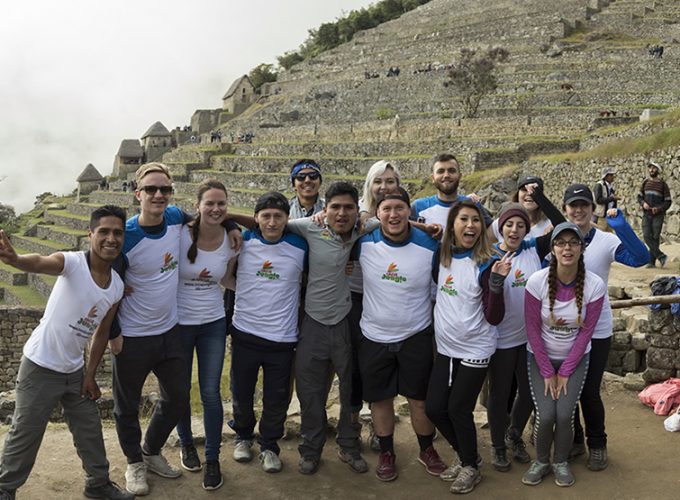 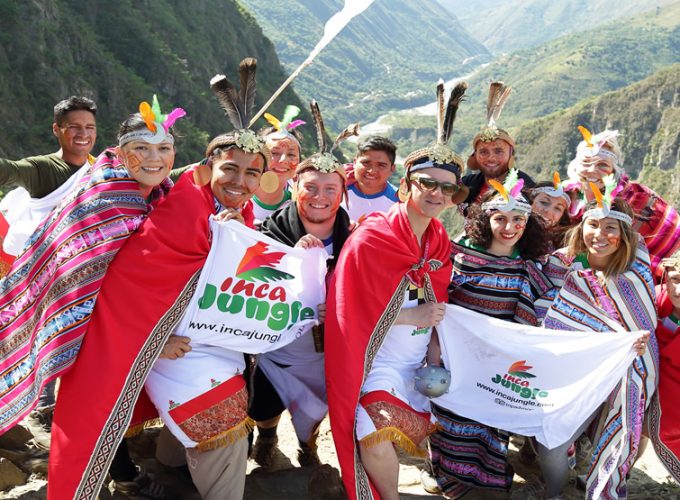 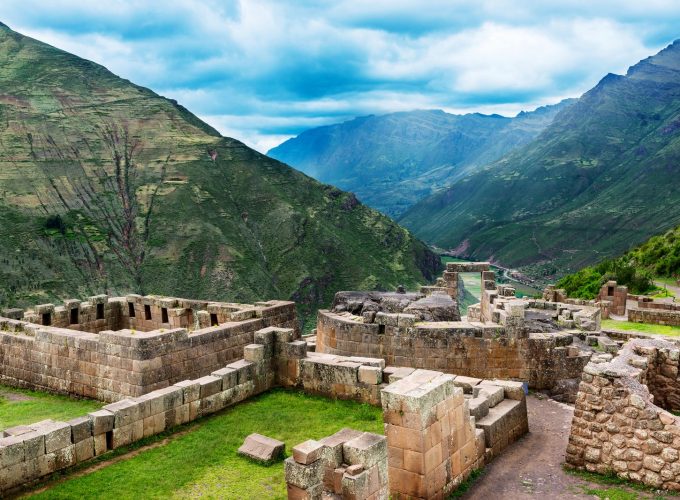 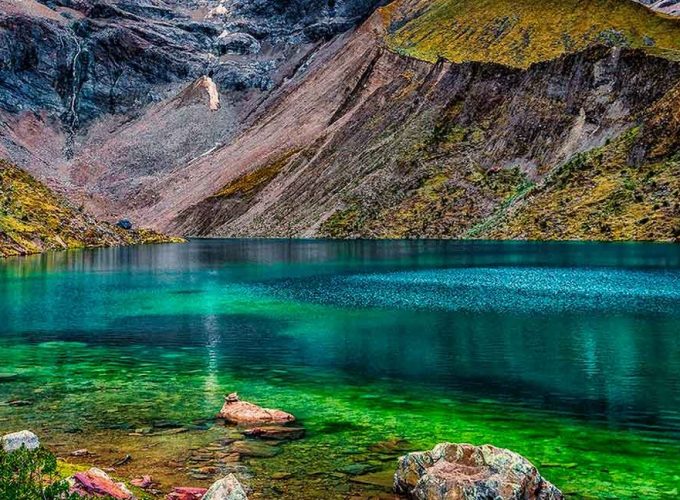